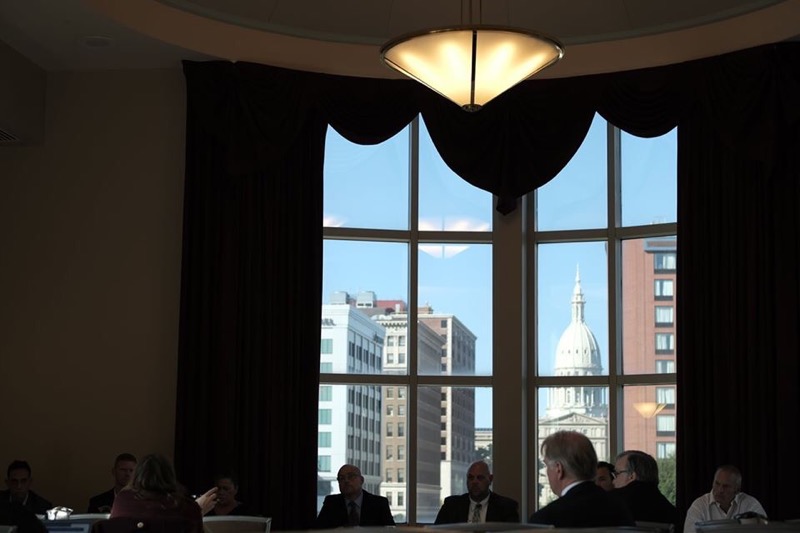 The roundtable, hosted by iHemp Michigan, featured regulators, farmers, processors and product manufacturers representing just a few of the many uses for industrial hemp – ranging from CBD oil to high-tech plastics.

LANSING – While many people are anxiously awaiting the start of Michigan’s recreational market, a group of farmers and processors working with a different strain of the cannabis plant are celebrating their first harvest.

“We see an opportunity to truly scale the plant to produce CBD and the fibers from the hemp plant,” said Dave Crabill, vice president of IHemp Michigan, an association of farmers, processors and manufacturers across the state.

The group met in Lansing on Monday to talk about the introduction of hemp into Michigan’s agriculture industry.

Since the 2018 farm bill legalized hemp production, Michigan started a pilot program, registering and licensing 572 growers, who planned to plant 32,614 acres, and 423 processors. And after planting in the spring and summer, the farmers are in the midst of harvesting their first crop.

The Michigan Department of Agriculture and Rural Development doesn’t know yet how many of those acres were actually planted, said Gina Allessandri, the state’s industrial hemp program director, but should have a better idea by the end of the year what kind of yield the first crop will produce.

David Connor switched from farming blueberries in Paw Paw, in southwest Michigan, to 26 acres of industrial hemp. This year, he has gotten about 20,000 pounds of hemp that will be split between the hemp flower, which will be used for CBD products, and the hemp stalks that will be used in everything from building materials, textiles and paper materials.

“We’re making some great headway in Michigan,” he said. “And in 2020, we think it’s going to be a huge year for Michigan.”

The return on investment is promising, Connor said. An acre of corn in Michigan during 2018, for example, yielded about 153 bushels at $3.55 a bushel, according to the U.S. Department of Agriculture, for a value of $543 per acre. Connor said the market value of the products from the CBD plant could be as high as $10,000 to $12,000 per acre.

“But this is an extremely labor-intensive process,” he said, noting that since he’s just finishing up his harvest, the market value is still an open question. “But we’re very optimistic.”

Hemp and marijuana are both cannabis plants, but hemp has much lower concentrations of tetrahydrocannabinol, or THC, the psychoactive component in cannabis that provides the high for users, than marijuana plants. Since 1970, all cannabis has been categorized as a controlled substance and, as such, considered illegal by the federal government.

The 2018 farm bill, however, legalized hemp and provides for regulating the growth of the plant. The fibers and stalks are used for a variety of purposes, including clothing, construction materials, paper, and plastic composites, while the seeds and flowers are used in health food and body care products containing cannabidiol, better known as CBD. The bill also allows for the transportation of hemp-based products across state lines as long as the THC level is below 0.3% level.

The risk involved for hemp farmers in Michigan is that any plant that tests above the 0.3% level has to be destroyed.

CBD-infused products derived from hemp range from tinctures, cream, candy and dog treats to water. CBD is touted, mostly anecdotally, as an ingredient that will do everything from provide relief from chronic pain and anxiety, make your skin smooth and silky, and calm skittish pets. The market for CBD products is expected to grow to $22 billion by 2022.

Casey Yosin, founder and CEO of Total Health Co., a CBD processing facility in Auburn Hills,, transitioned from the building industry to CBD production after a sports injury left him bedridden for six months. He researched the benefits of CBD and started using the plant.

“From my personal experience, I used CBD to heal,” he said. “I figured it’s something I can do to get out and help people.”

An additional benefit for the hemp farmer, said Gary Schuler, founder and CEO of GTF LLC in Grand Rapids, is the ability to use the entire plant. His company dries and processes the hemp waste, which is then used in food products, animal feed, biodegradable plastic and building products.

“We’re really helping decrease the carbon footprint,” he said, because some of the petroleum-based plastics can be replaced by the biodegradable plastic made from hemp waste.

While waiting for final rules from the U.S. Food and Drug Administration, which will regulate CBD-infused food products, the state plans to continue the hemp program next year and will still register and license anyone who wants to get involved in the program. For more information on the state’s industrial hemp program, click here.

The state’s other emerging cannabis-based business — marijuana for adult recreational use — will begin after the state begins accepting business license applications on Nov. 1 and awarding licenses by the end of the year.

You have Successfully Subscribed!

You have Successfully Subscribed!

We promise to respect your email address and will not share or sell your email.